What’s the best drink with oysters?

What drink do you like best with oysters? Beer? Wine? Sake? How about cider and oysters? 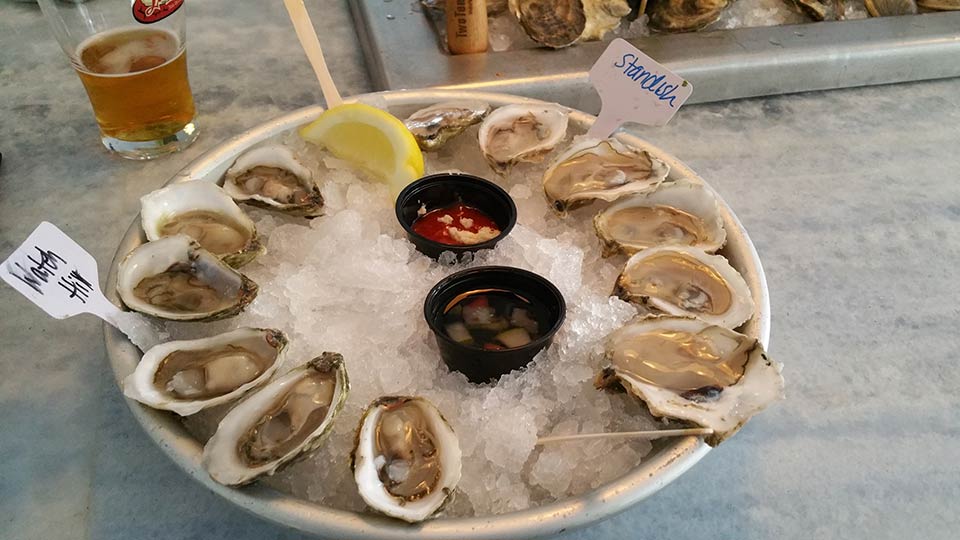 10+ opinions of the Best Drink with Oysters

My thoughts on the subject are always evolving, but the general rules that always hold are, for beer, crisp crisp crisp (think pilsner) and not too hoppy. For wine, right now I’m drinking Eric Sussman’s County Line Rose. Eric literally crafts the wine with Hog Island Sweetwaters in mind (and sometimes in hand), but it’s equally beautiful with other Pacifics and even Eastern oysters, thanks to all the edgy acidity and aromatics. I’m not alone in this opinion; last year Eric Asimov named it Best California Rose in the New York Times. ~ Rowan Jacobsen

I agree with your choice of beers in terms of style, and think beer is a great compliment to oysters. Of course, the classic is dry champagne. For wine, I cannot think of a red that works all that well (maybe just my ignorance, of course), but for whites I really like a Picpoul from the Rhone Valley of France or a nice Austrian Gruner Veltliner. If you want something harder with your oysters I would go with a martini. And by martini, I mean gin, up with a twist. As God intended…~ belder

We experiment with numerous dry whites but when I am at our local Cajun place with half price oysters at happy hour, I like a dry draft beer. Later this year we will be just outside Paris and I hope to experience some more interesting wine pairings with their oysters. ~ Northeaster

Salty, citrus forward and drift-woody scotches, like Bunnahabhain, Highland Park, and Scapa are always my favorite, especially with European Flats and Olympias. I’ve also had some martinis made with oyster liquor instead of of olive brine that have turned out nicely. ~ gbabinecz

We are starting to play around with Barr Hill Gin (Caledonia Spirits) and oysters. So far it seems quite promising! ~ auggie

I will sometimes stick with the whole theme of flavor and have a Bloody Mary. If I really want to capture the spirit, I will make a bloody Caesar. (splash of clam juice added) ~ LtChief25

Hands down, my favorite oyster accompanying beverage is Prosecco! ~ skippe36

Fortunately, California producers of cheap wines that had nothing in common with authentic Chablis have mostly desisted from the practice of labeling their products “Chablis.” A true Chablis is a wine grown in a region halfway between Dijon and Paris, and stands apart from the rest of Burgundy. Its Kimmeridgian clay and limestone subsoil is peculiar to its location and its climate somewhat harsh, imparting to its wines the wonderfully dry, flinty flavor for which they’re known. These wines, while produced from Chardonnay, are more reflective of their soils–especially in the idione-y, crushed oyster shells aromas–than of the grape from which they’re produced. If there’s a better wine to pair with great oysters, I’ve failed to discover it.

Grand or Premier Cru Chablis are rather expensive, so for most they’re pairings for only the freshest, choicest oysters. The wine should be served cool (45 to 50 degrees F), so please avoid chilling it for too long: The icy cold decreases our ability to taste the nuances and subtleties of these wines. My personal preference is to serve quality white wine a bit warmer, even.

For that special occasion, our friends who call Cascadia home might try one of these wines, or another Chablis possibly recommended by their favorite wine merchant, paired with a dozen Olympia (affectionately referred to as Olys); or for easterners, with a plate of wonderful PEI oysters: Summerside are quite good. Bon appetit! ~ raykalendek

raykalendek, I really appreciate your comments on Chablis wine in US vs real Chablis…when we were in France several months ago and tasted the real thing it was a truly amazing discovery of how wrong the US version of this great wine was and why I never liked it. Now, my favorite wine store is selling me a number of true Chablis from France at reasonable prices to accompany my lovely oysters…it is a perfect wine for oysters. ~ Northeaster

I love pairing East Coast oyster with a nice, slightly chilled Manzanilla Sherry. For West Coast Oysters I prefer a slight chilled Fino Ynocente sherry. Some great whites I’ve paired with oysters would be Txakolina from the Basque region of Spain as well as various Muscadets. Muscadet could really go either way depending on region and wine maker, but i prefer the mellow, vanilla noted muscadets with my oysters. ~ Mattdinkel33

Many, many years ago, I “straightened out” a senior VP of the national organization my job was affiliated with after he showed up late to a meeting between us at a haunt of mine in the Old Port area of Portland, ME when I passed the time by eating a dozen or two oysters accompanied by shots of ice cold vodka…seemed like a good idea at the time! I have matured since then and have not gone back to that intoxicating combination. I believe much of the fun of finding new oysters is the subtleties of each and finding suitable drink companions for them. ~ Northeaster

I agree Bloody Marys can be great, but I’ve decided that they really need to be paired with Olympias. Think, brunch. Or even breakfast. I like Greg’s Scotch choices. I just did a blind tasting of 25 single-malts and chose Highland Park (15) best in show. Just bright enough for oysters. Picpoul is very good with oysters. Sounds like I could drink with belder anytime. ~ Rowan Jacobsen

Several months ago, I was in Denver & got into a conversation with the Highland Park company rep. He talked about the move into non vintage Scotch being the future for single malts….sounds heretical but I tried one (can’t recall the name) and it was not bad…but, I have never tried my Dalwhinnie with oysters so this discussion has enlightened me!

I don’t want to hog this spot, but this evening I asked our shucker at the local oyster bar if he gets asked this question very often and he replied that it is fairly common. He usually recommended a dry white wine or one of his milder dry draft beers. Just from the number of oysters being served up tonight, it looks like oysters are getting even more popular with our Cornell students and their parents (many here for spring break). ~ Northeaster

I have to say that when me and my wife went to Maison Premiere we not only were blown away by the oyster selection . The mixologist specialize in absinthe cocktails .WOW ! It’s on Bedford avenue in Brooklyn . I recommend it to everyone ~ ChefEspo

I live in San Diego, so I grew up having oysters in Baja. Pacifico/Tecate and Hornitos Repesado have always lead to some good times when paired up with a big Pacificas or Nautilus Oysters in San Quintin. I have enjoyed many oysters… Carlsbad Blondes and Hood Canals especially… when paired with a good sauvignon blanc from New Zealand. I have also had some delicious Blue Points and Phantom Creeks when matched up with a Hendrick gin and tonic. Always looking to expand my Oyster Horizons. Something my dad told me, “Enjoy every oyster you ever eat…because that oyster…might just be your last.” ~ OysterMax

Okay, I have a new favorite: Hill Farmstead Works of Love, a hoppy blonde ale brewed with Earl Grey tea. The tea is subtle enough that you wouldn’t guess it if you didn’t know. It just feels light and fresh, an incredible quaffer. And with an ABV of 3.7%, you can just keep quaffing. ~ Rowan Jacobsen